Malt is an important (some might argue the most important) ingredient in beer, malt whiskey, and certain food products to add flavour, texture and colour.

The malt itself comes from barley. Barley has starch needed to make beer and malt whiskey, but it is inaccessible in its natural form. That’s where the malting process comes into play.

The process itself is defined as the “controlled germination and drying process that changes the microstructure of cell walls, proteins, scratch granules.”

There are three major steps that barley has to go through to become malt:

First, the barley has to be harvested and checked that the barley is free from contaminants (such as plants and other grains). Once completed, the process can begin.

Steeping is the first step, and this is where the moisture content of the barley is raised by immersion in water. The water is added to the barley to ensure that it has enough moisture to sustain the next stage of the process – germination. 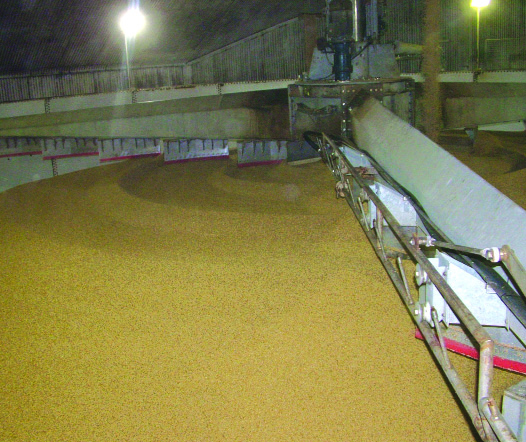 The barley itself is full of starch which is a sugar that yeast can ferment, so it is transferred to germination units where germination continues. Enzymes are produced to break down the starchy material (endosperm) partially, and then a rootlet is formed.

Once the correct degree of modification is achieved, the green malt is transferred to the kilning unit as the barley is now known. Here, the controlled drying and curing process halts germination and imparts the final colour to the malt necessary for its final use. Kilning preserves the enzymes and sugars. It’s essential for adding flavour to the malt. The time and temperature have an impact on the flavour produced.

Now in a stable condition, the malt is screened before storage, where it’s held for long periods before despatch.

Here at Don Valley, we have a whole division dedicated to malting and providing maltsters with the correct equipment. If you’re interested in what we have to offer or just simply want to learn even more about the malting process, click here!

We are experts in design, build
and installation.

Our team’s unique skills at Don Valley Engineering Ltd. are highly regarded. We are able to offer YOU standard units across the range but most of our clients utilise our company’s Bespoke Design service to Guarantee Enhanced
Plant Production. We stand tall in Designing and Manufacturing robust equipment that is Built to Last!

Call Us NOW!
We can help you.

We use cookies on our website to give you the most relevant experience by remembering your preferences and repeat visits. By clicking “Accept All”, you consent to the use of ALL the cookies. However, you may visit "Cookie Settings" to provide a controlled consent.
Cookie SettingsAccept All
Manage consent

This website uses cookies to improve your experience while you navigate through the website. Out of these, the cookies that are categorized as necessary are stored on your browser as they are essential for the working of basic functionalities of the website. We also use third-party cookies that help us analyze and understand how you use this website. These cookies will be stored in your browser only with your consent. You also have the option to opt-out of these cookies. But opting out of some of these cookies may affect your browsing experience.
Necessary Always Enabled
Necessary cookies are absolutely essential for the website to function properly. These cookies ensure basic functionalities and security features of the website, anonymously.
Functional
Functional cookies help to perform certain functionalities like sharing the content of the website on social media platforms, collect feedbacks, and other third-party features.
Performance
Performance cookies are used to understand and analyze the key performance indexes of the website which helps in delivering a better user experience for the visitors.
Analytics
Analytical cookies are used to understand how visitors interact with the website. These cookies help provide information on metrics the number of visitors, bounce rate, traffic source, etc.
Advertisement
Advertisement cookies are used to provide visitors with relevant ads and marketing campaigns. These cookies track visitors across websites and collect information to provide customized ads.
Others
Other uncategorized cookies are those that are being analyzed and have not been classified into a category as yet.
SAVE & ACCEPT